Sean Redmond is a Managing Partner of SiliconCatalyst UK the semiconductor start-up accelerator. He has over 35 years of experience in the semiconductor and software industries. Starting his career as a chip designer, he led two market leading design teams. Firstly in digital stereo sound for television and then the first embedded mobile phone chip with VLSI technology. Sean was VP Europe for Verisity Design Inc, taking them from a standing start to over 120 customer sites throughout Europe in 5 years. He instigated and led the strategic partnership with ARM, fueling its meteoric rise and successful IPO. Following their acquisition by Cadence, Sean became VP & GM of Cadence EMEA, doubling its business in 3 years. As VP WW Sales and Marketing for ARC, he helped turn it cash flow positive, leading to the eventual sale to Synopsys. In 2010 he founded and has been the CEO of Vertizan Limited, the developer of the Vitaq AI-driven Test Automation tool suite. Sean has recently worked closely with the UK government on industrial digital strategy, co-chairing the ElecTech council and being a core member of the industrial digital leadership team.  Sean has a BSc(hons), MSc EE from Kings College, London and MBA from Henley Management College.

Bruno is an expert in the conceptualization, design and development of standard products for the electronics industry. He began his career on the graduate program of Hitachi Europe, where he participated in the development of system-on-chip DAB radio receivers. His subsequent experience at Acapella and Semtech covers positions of responsibility in business units involved in wireless, communications, human input devices and sensing. Bruno holds a BEng from the University of Sussex, an MSc in Microelectronics from the University of Southampton, and an MBA from Imperial College Business School. 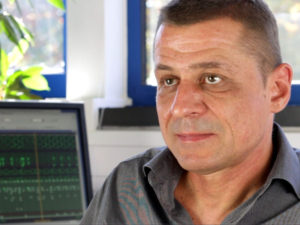 Wolfgang is an expert in communications technology, with wide-ranging experience in the design and management of complex high-frequency semiconductor products. Capable of design at the software level, the system level and at the transistor level, Wolfgang understands architecture, process technology, device requirement, risk, and cost considerations for complex products. Wolfgang’s experience stems from 13 years at Semtech and Acapella in Southampton, and a further 4 years at ES2 in France. Wolfgang is a graduate of the Technical University of Munich (MSc equivalent).

Before Cascoda, Wouter worked as an architect at the IoT office of the CTO at Cisco Systems. In this role Wouter was responsible for the connectivity in the home between set top boxes and their controlling applications. During his tenure at Cisco he moved to the office of the CTO of the IoT BU where he was working on various standards related to IoT, e.g. OCF, Thread.
Wouter started his career at Philips’ Physics Labs, where he worked on simulation applications for cathode ray tubes. Later he migrated to Applied Technologies, working on home network connectivity (UPnP/DLNA). Later he moved to the Television division where he functioned as a technology leader in that field.
In this role Wouter oversees the day-to-day administrative and operational functions of a business, and is the main representative of Cascoda in various standards organizations. He currently sits on the Board of the OCF and the Technical Board of the KNX standards organisations. His many and various contributions in into these standards form the backbone of the Internet of Things.

Peter has over 30 years of embedded software development experience covering operating systems, communications protocols and encryption methods, with the last 10 years spent developing low-power-wireless software. He was responsible for ZigBee development at CompXs (later Integration Associates) and produced high-level-protocol stacks awarded ZigBee golden unit status. Subsequently he has been a consultant to Philips and other smart energy companies. Peter has held positions of responsibility in the ZigBee Alliance, and he continues to participate in standards development. Peter has a BA in Mathematics from the University of Warwick, an MSc in Computer Science from the University of Essex and an MBA from the University of Leeds.